Here is the next installment of How I Met My Girlfriend! Links to all HIMMGF posts here.

Apparently, Prague is a pretty normal vacation destination for Europeans, but when I told my parents I’d be traveling to Prague for a few days so Jas and I could meet our Russian friend, Dasha, they were confused and slightly concerned. Here in the States (or at least in my state), not many people go to Prague. When my dad took his European backpacking trip in his twenties, the city wasn’t on the list. And since we fear what we don’t know, so my family questioned my safety in Eastern Europe. I, obviously, told them they had nothing to worry about.

Fast forward to our first five minutes on the road with the driver our Airbnb host ordered for us, and the van got rear-ended at a stop light. The fender bender wasn’t too scary in itself; we hardly lurched forward into our seatbelts. The fear settled in after our driver, who didn’t speak much English apart from “sorry,” pulled off the side of the road three other times to make phone calls. After the first time, my brain had already convinced me that I’d never see my family again because I never took self-defense classes and my dad was not Liam Neeson.

Luckily, that had just been another moment of my head’s default worse-case-scenario mode, and we made it to the Airbnb safe and sound. The three of us spent most of that day trying to figure out how to pay for the city’s metro. There was a station right outside our apartment, but the ticket machine only took Czech Koruna coins. Thinking I could pay by card, I didn’t have any of the local currency, and Jas and Dasha thought Euros would work just fine. Yet, even when we found a cashpoint to get the Koruna’s, we then had to buy random stuff from a Lidl just to break it into coins for the metro ticket. After a few hours, we finally were able to buy a 3-day metro ticket for the equivalent of about $13, which is half the price I spend on a day’s worth of tube travel in London.

On our first full day, we had booked a 4-hour walking tour with a Russian woman who moved to Prague years ago and also spoke English. Unfortunately, her English pronunciation wasn’t as good as Dasha’s, and we all struggled a little bit to understand all her tidbits of information. At one point, the guide was telling us what each statue of the Astronomical Clock represents, declaring that one of them stood for “lost.”

“Last.” The guide repeated. Dasha turned to her, and the guide Russian’ed the word instead.

“Ah,” Dasha nodded, turning to Jas and I. “When you thirst for someone.”

“Lust,” we decrypted, the three of us laughing together at Dasha’s definition. That’s probably what we spent most of our time doing together, laughing.

I had no worries about getting along with Dasha when we met in person. Out of all the people I’ve met through twitter, Dash is the only person I talk to regularly, laugh with regularly, and share some of the heavy stuff with. Just about everyone else only knows the surface me. Dasha gets the whole enchilada. I was, however, worried about making someone feel like a third wheel for the few days she’d been stuck with us.

I’d also been worried about Jas and Dasha not getting along as well as I hoped they would. They were friends—don’t get me wrong—but Jas’ brain has a way of making her think that her friends don’t actually like her. Part of me wondered if Jas thought Dasha only cared about seeing me, and that Jas just happened to be coming. Completely not true, and I knew it, but I also knew how Jas’ head worked on a bad day: completely irrotationally.

On our day tour, I took pictures of them together in front of the Prague castle and candids of them overlooking the city. I knew Dash loved Jas, but sometimes Jas is a dumbass who doesn’t know those things. We got to day two and I still wasn’t too sure if she knew it yet.

I met a friend, Tina, that I’ve known for six or so years on Tumblr the second day. She lived in Brno while going to university, and Prague was a short two-hour train away. We never expected to get the chance to meet up, but after years of playing catch-up with each other (since one of us almost always takes at least two weeks to reply to a message), we finally got the opportunity. Tina and I walked together across Old Town Square, catching up again, with her coming to the end of her degree and my few months spent here in Europe.

I turned back to Dash and Jas walking behind us. Dasha’s arm linked into Jas’ own, leaning her head onto Jas’ shoulder despite the fact she was taller than both of us. They both smiled when they saw me turn back.

Dasha is one of the better friends Jas has had because she knows how much of a dumbass Jas can be. She goes another step to try to make Jas feel welcomed and loved when a lot of people would give up with trying. She is one of the only people that I am close with who is also close with Jas, where our friendship is split evenly down the middle. And that’s helped me see just how much Jas’ BPD affects her friendships, and it helps me distinguish what feelings Jas’ head convinces herself of.

And it’s tough for a person to be in such a situation. But Dasha rolls with it. She is understanding and open-hearted, but strong and someone who doesn’t take bullshit. She’s one of the few genuine people I’ve met on Twitter, who is as invested in our happiness and struggles as Jas and I are with hers. And she’s also the person we’ve laughed the most with.

We collected bottles of some European ciders and wine coolers at a grocery store near our apartment both days we spent walking the frosted city streets and drank enough for us to get the giggles. As planned months ago, we took some pictures of Dasha being an annoyed third wheel, but even she couldn’t keep a straight face for more than a couple shots at a time. Our chests rippled with laughter, cutting into the false seriousness she tried to put on camera. We took pictures of nothing and laughed about them for hours. We laughed over the way Jas’ leg looked like a body builder’s thigh in an accidental snapshot. We laughed over the way I carried my body like an 80-year-old woman was Dash took a candid of me bringing tea to Jas in the bath. The dumbest things made us tearful with laughter that last night together.

We all took an Uber together to the airport the next morning, when the snow fell in thick, clumpy flakes. Dasha’s flight left hours earlier than ours, and even though we all felt dead on our two or three hours of sleep, I still had enough energy in me to cry after she left.

Jas and I said our goodbyes to her before she got in line to get her passport checked. “We will see you again,” I told her mid-hug.

“We will,” she confirmed.

I am still scared that maybe we won’t. The world is changing every day, and I won’t be back in Europe for at least another year. I never lose touch with people that I don’t want to lose touch with, but I’m always scared that I will.

Dasha left to get in the passport and security line. Jas and I followed her, watched her hand her passport to the officer, and waved as she departed the gates beyond our view, even though she didn’t see us.

Jas and I spent the rest of our time together making sure to send videos of us sampling Russian sweets to Dash and watching the rest of Orphan Black together. The kiddo needed her moms during her post-Orphan-Black breakdown.

P.S. “Prague Pussies” is the name of our group chat.

If you enjoyed this post, please consider donating $3 to support my work!

One thought on “HIMMGF–Part 18–Prague Pussies” 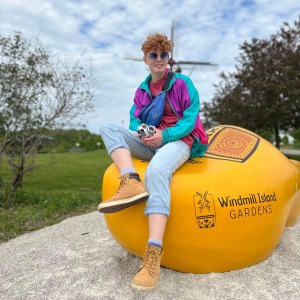 enjoy this photoshoot of my very first CROCHETED SWEATER VEST!!!! thank u so much to @by.redbean for this checkmate vest pattern—it was super fun and easy to use!!
had a happy cap season ❤️
imagining this summer’s solo day trips to the ruins #35mm
late 22 wrap up!
8 years my person 💖
hello my name is jeff