Here is the next installment of How I Met My Girlfriend! Catch up on all HIMMGF posts here.

As you may know, I returned from the UK mid-February after staying with Jas for four months. I am past the crying-every-night stage of my post-return LDR heartbreak, but some days are still difficult. (For my personal LDR advice, catch up on my “How to Make the Distance Work” series.)

However, I’m here to share some updates with Jasmin’s BPD, how we’ve managed to handle it, her progressions, how her last doctor’s appointment went, and how we are on moving forward. Catch up on my last post re: Jas’ BPD here. Like before, Jas has reviewed this blog post before publication.

Prior to my British return, I had mentioned a few times to Jas about going to see her primary care physician (PCP) to check back in with her BPD and have it reviewed, so to speak. She wasn’t so enthused with the idea.

Jas hadn’t seen a medical professional since early 2017 when she had been diagnosed with borderline personality disorder (BPD). At the time of diagnosis, the PCP prescribed Jas two tablets of quetiapine a night. This medication is an antipsychotic and works to stabilize mood swings by balancing neurotransmitters in the brain. A common side effect is weight gain.

Stuck on the side effect, there are days I’m unconvinced the medication is helping at all, and instead only worsening her self-image, creating poor eating habits and increased low moods. But hey, quetiapine did its job, right? The moods weren’t swinging as much anymore; it was more of a constant low with spikes of positives or anger.

In fact, the medication made her feel so bad that she started taking only one pill a day sometime during 2018. And then suddenly, I was convinced that the medication was helping because the spikes between highs and lows became more frequent, along with sudden anger bursts and intensely irrational thinking and splitting.

After some time, a (different) doctor from her office reviewed her medication over-the-phone before Jas could refill her prescription. To my own shock, Jas honestly disclosed her decision to self-decrease her dose and indicated she wanted to try a different medication. The doctor did not consider her request to change medications and stressed her need to take two pills a night because her file stated her dose should be three nightly, but they wanted to “ease her into it.” He didn’t say anything about the fact that she’d already been on this medication for a year, yet no one had told her to increase her dose. (To this day, over two years of taking this medication, no one has told her to increase the dose, and she still takes just the two nightly.)

Alongside the medication complications, Jas was never offered any kind of therapy or support groups. In her area, many mentally ill patients are referred to a group called Suffolk Well-Being, which offers mental health support through courses, support groups, and therapy. However, when Jas received her diagnosis, she was never referred to the group for unknown reasons. Jas suspects it’s due to the fact that she avoided support through CAHMS as a teenager, over four years ago.

During this waiting period between Jas’ 2017 American trip and my 2018 UK trip, I’d been fuming over her denied requests for a medication change or consideration for any kind of therapy or support outside of drugs. I often suggested we should make an appointment with her PCP when I returned to the UK. She agreed mostly reluctantly, convinced there would be no change of treatment plan.

In the meantime, Jas had found out about a BPD support group in her hometown through one of our friends. So, I carved out the time to make sure she filled out the paperwork to be put on the waiting list, which they warned could take as long as twelve months.

In the months leading up to the doctor’s appointment in February, I wrote lists of reasons Jas needed support in addition to the medication. This accidentally turned into an obnoxious project that consisted of research showing mental illnesses needing both biological and psychological intervention and support for effective treatment, a thorough list of worsening symptoms related to her BPD (complete with real-life scenarios), and a convincing argument pointing towards a need for new medication. I played out several conversations between me and Jas’ doctor numerous times while busing to town or taking a bath and rehearsing my points so they flowed effortlessly. This kind of accidentally became something I obsessed over for a little bit.

Jas was so nervous waiting for the doctor in the lobby, reporting to me how sick she felt about every three seconds. Even I was nervous for her appointment. In some ways, I felt some pressure in being able to secure a new treatment plan for her because I knew if this went wrong yet again, that Jas would just give up with treatment options after this.

After rehearsing my give-my-girlfriend-adequate-treatment speech silently in the waiting room for 20 minutes, the doctor called us into her office and reviewed Jas’ case aloud for us all to be on the same page. Before Jas or I could interject, the doctor stated, “What I don’t like about this, is that you don’t have any mental health support,” and proceeded to talk to us about how necessary it is for Jas to have both medication and psychological support.

In the end, I unnecessarily rehearsed this speech and the doctor finally referred Jas to Suffolk Well-Being for support. She stressed the need to work with the support team alongside the continued use of her current medication so that the medication has a chance of working as part of a full treatment plan. However, she did make a note in Jas’ file that there was an official request for a medication change and that self-image due to the medication’s weight gain side effect is something that affects her mood regularly.

I felt pretty good walking out of the office. Jas finally got referred to outside support for the first time since her diagnosis of BPD (and the first time in five years), and although the doctor hadn’t changed Jas’ medication as we’d hoped, she seemed to understand the concerns she had and adequately explained why this change should wait. Jas, on the other hand, was significantly less optimistic.

To my naïve disappointment, Jas’ pessimism hadn’t been entirely misplaced. After a month of waiting, the Suffolk Well-Being team ran a telephone assessment on Jas and placed her in a 4-course session on coping with low moods, dealing mostly with low to moderate symptoms of anxiety and depression. The problem is that Jas bounces from manic to suicidal in the matter of seconds based on a number of inconveniences, which is to say her symptoms were certainly not low to moderate and the courses were probably only 3% helpful.

To make matters worse, the organization threatened to close her case for missing one session because of work, which she had already notified the team about. After the four courses were complete, Jas was told to await another phone assessment for further treatment placement with Suffolk Well-Being. This was over a month ago now and she has yet to hear back from the team.

So, all of that has been fairly negative thus far, but fear not! I do have a few great things to share with all these updates. First up, the BPD support group that Jas applied for back in spring of 2018 has finally contacted Jas about being next up on the waitlist, so she will begin attending this support group in just a few weeks!

What I am most excited to share, is that Jas has actually been managing her BPD symptoms incredibly well this last month or so. Usually, Jas “splits” during a conflict, meaning her black and white perspective is at its worst, and she interprets the situation (or myself) as all bad or all good. And obviously when it involves conflict, this flips to an “all bad” point of view, which triggers a lot of anger and self-doubt, making her temporarily incapable of understanding my perspective and working through the conflict quickly. As mentioned in my LDR communication blog, we try to deal with this with a one-hour cool off period to give Jas time for her “splitting” to even out, and for me to have a break and not match her anger equally as a defense mechanism.

Lately, however, Jas has done an exceptional job with managing her split thinking during conflicts. When she splits, she becomes pretty unreachable because her thinking is completely irrational, which is why I have to take a break. Nothing I say quite gets through to her, which makes both of us angry and irritated. These last few weeks though, Jas hasn’t been splitting. She’s remained fairly calm through conversations combatting a conflict, long enough for my words to get through to her and we’re able to handle the conflict and resolve it in less than an hour, which is huge.

We’ve been trying to pinpoint what it is that could have led to such a huge improvement in her symptom management, but it’s unclear. We both have doubts that the Suffolk Well-Being courses could’ve had much of an impact because it didn’t focus on conflicts, mood swings, or splitting in the slightest, but perhaps it could be an influence. I’ve also been better able to identify her triggers faster, so that may also be helping.

We’ve also been watching Crazy Ex-Girlfriend over the past month, where the main character has BPD. Jas is obviously thrilled at being able to identify herself onscreen with someone who shares her chaotic persona, seemingly irrational behavior, and diagnosis.

Although the character’s BPD is slightly more chaotic than Jas’ and they experience it differently, it was really good for me to see some behaviors that Jas exhibits in a character with her diagnosis and see these behaviors as an extension of her BPD. Plus, it was so great for us both to share a laugh over the BPD rather than get stuck on how heavy it can be. Crazy Ex-Girlfriend brought a light-heartedness to the situation that we very desperately needed, and it helped us both deal with the hard parts of it.

Likely after a few months of Jas’ BPD support group, I will re-update HIMMGF with how her BPD is developing and how the symptom management is going. If you are more interested in advice (as someone who has BPD or someone who loves a person with BPD) you can check out my page for Advice for Borderline Personality Disorder, which includes posts on how to reassure a person with BPD and how to handle conflicts when BPD is a factor.

If you read and enjoyed this blog post, please like/share! Or, please consider sending me $3 to support my work! Or become a patron and access exclusive content for $1/month! 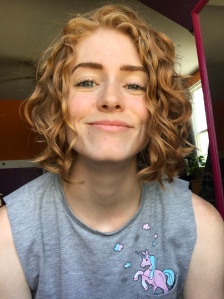 these last few weeks have been full of more laughter than i’ve ever known. 🥺❤️ love you and miss you both
so happy for this new chapter ❤️
happy birthday my fellow taurus cusper ♉️💜 so grateful for our friendship and all the time we’ve been able to spend together in the past several months. i love your silliness and how much you love uno. thank you for always making me feel like one of the boys ❤️🥰
heart full house full 💙
“so how’s the new roommate working out?”
collecting solar system fun facts since ‘95 🪐 thank u @alicynm i’m in love w my leg